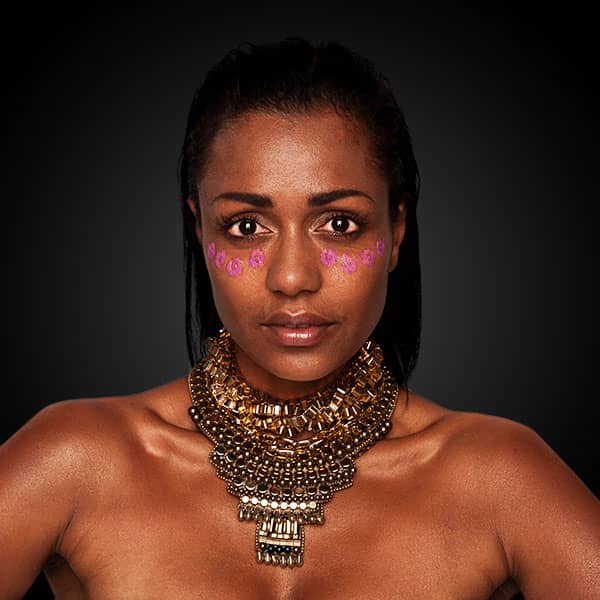 At the age of 14 Corr won the first Danish Children Songcontest (Børne Melodi Grand Prix “MGP”). As a young adult she started singing background on tours and in the studio for Danish artists such as Gnags, Sanne Salomonsen, Thomas Helmig and Rasmus Nøhr.

In 2002 Corr became known to the Danish public as a member of the short-lived girlgroup Sha Li Mar, consisting of Christina Undhjem, Engelina and Corr herself. The group regularly performed on the prime time television show Venner for livet (literally “Friends for life”). They released a self-titled album in the same year. In 2004 Corr collaborated with house producer Morten Trust on “I Put My Faith in You”, a moderately popular dance hit.

Corr rose to fame in her native Denmark in 2005 with the release of her debut album Streetdiva and in 2006 with her follow-up album Robosoul. After creating a special song with Dutch DJ Fedde le Grand as part of the Live Earth set of international music concerts, her popularity began to spread outside of her homeland. The song, entitled “Mirror 07-07-07”, was played at exactly seven minutes past the seventh hour of the seventh day of the seventh month of 2007.

In 2007 Corr received exposure in the Netherlands due to her second collaboration with Fedde le Grand, and her most recent self-written single, remixed by Fedde le Grand, “Let Me Think About It”, spread to wider Europe quickly. It is the best-selling single outside Denmark from a Danish singer since the Danish bands Aqua and Infernal.

In 2008 Corr released the compilation album One in Scandinavia. The single “Let Me Think About It” continued its success and reached number 1 on the Billboard Hot Dance Airplay. Though the single peaked only at number 14 on the German Single Charts, it stayed for 40 weeks there in 2008, which resulted in being the track staying the longest in the German Top 100 in 2008. One was released in the United States on 26 August 2008 as the first release on the newly founded label Ministry of Sound America. A release in Russia and Germany followed quickly afterwards.
Corr was also member of the band called SugaRush Beat Company that performed on Later… with Jools Holland in 2008, with a debut album being released in September 2008. Other members of the London-based group were Australian-born producer/multi-instrumentalist/songwriter Jarrad ‘Jaz’ Rogers and US soul singer-songwriter Rahsaan Patterson.

In January 2009 Corr received an award for the best selling Danish artist selling music in Europe at the European Border Breakers Awards in Groningen In April 2009 Corr released a music video to “Ride My Tempo” simultaneously to a single release in Germany. A month later a new single for Scandinavia, called “Time”, premiered on Danish radio, taken from her fourth album, Under The Sun. The leading single from the album became “I Want You”. A musicvideo, however, was only shot for the “Jason Gault Mix”. In December the title song, “Under The Sun”, which features guest vocals by Jamaican singer Shaggy, was released as a single.